The Meander River (Anatolia, Turkey) once formed a conduit between Europe, North Africa, and Asia. Herodotus mentions the Meander’s winding ways and Strabo gave us the meaning of meandering as wandering. In the modern era the river has all but disappeared from the cultural imagination and meandering has acquired a negative connotation: the opposite of goal-oriented efficiency. I trace the various trajectories of the Meander and show how in the 21st century meandering has gained renewed significance, both in its riverine and metaphoric capacities. It resonates with new approaches to innovation and creativity in science, technology and policy: wandering to elucidate attributes, relations, problems, and solutions. It reflects the ancient Greek notion of cunning intelligence, mêtis, in its sense of resourcefulness, practical effectiveness and experiential wisdom. Meandering can be of pertinence for understanding the multiple-mediated mosaic of the Mediterranean.

In this essay we assert that the larger contours of the Los Angeles story – from utilitarianism to reclamation, conservation, and revitalization – form an exemplary case of a shifting paradigm in the relation between cities and their water. We conclude by focusing on the Los Angeles River as an icon for this shift in water ethics or water mentality: from a sheer utilitarian mindset to an equitable and sustainable approach (Price 2008: 240). The late 20th century initiative to revitalize the river offers a tantalizing alternative that sets out to reconnect the city with its natural environment, viewing water no longer as a resource to be used up, but as part of a living—albeit infrastructural—river to be valued and respected. The Los Angeles River shimmers throughout our story – a small unimposing river, outgrown, overgrown and initially ditched by the city to which it gave birth; then re-entering the cultural imagination as a character in its own right. The Los Angeles River presents us with a green-grey hybrid infrastructure that questions strict separations between human built/technology and nature, between various social-economic cultures, and between different practices. 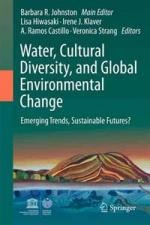 A product of the UNESCO-IHP project on Water and Cultural Diversity, this book represents an effort to examine the complex role water plays as a force in sustaining, maintaining, and threatening the viability of culturally diverse peoples. It is argued that water is a fundamental human need, a human right, and a core sustaining element in biodiversity and cultural diversity. The core concepts utilized in this book draw upon a larger trend in sustainability science, a recognition of the synergism and analytical potential in utilizing a coupled biological and social systems analysis, as the functioning viability of nature is both sustained and threatened by humans.

Informed by the results of a baseline research study of regional citizen knowledge and understanding concerning watershed issues, a team of university faculty and classroom teachers designed and implemented a water conservation education program to address lacking areas of watershed knowledge. The authors developed age-appropriate, hands-on lessons, aligned with local and national educational standards, for an audience of school-aged children (5–10 years), which was representative of the surveyed population. The authors present the results of the baseline watershed survey, a description of the implemented educational program, and how the program was received. Responses to the water conservation education program (as ascertained by teacher participant evaluations and student participant commitments) suggest involvement in the educational program may positively effect current and future water conservation behaviors.

Conflicts over the sharing of the Rio Grande/Rio Bravo and Colorado Rivers between the United States and Mexico are usually understood in spatial terms. In this paper we argue for the need to add a temporal horizon. A larger historical context will reveal that water management, including water allocation and river politics, has always been influenced by larger social-political and cultural frameworks. These temporal shifts are sequential, but overlapping so that current policies as cultural constructs operate within the framework of previous treaty obligations though the historical contexts have changed. The Rio Grande/Rio Bravo is still defined as a border separating two countries. There is emerging at the grassroots level an understanding of the watershed as an ecological resource that unites the two countries. Bringing together the cultural definitions of the river as political boundary that separates and a basin that unites is already underway.

In this chapter, we deploy a specific approach to negotiating, namely, negotiation through the notion of boundary objects (Star and Griesemer 1989). We see a boundary object as a mediating agent. Through it, one can come to a practice of cooperative management. Boundary objects are meant to navigate conflicts by finding connections and emphasizing relations. In that sense, they do justice to the heterogeneity of the various entities affected by complex decision-making processes. We introduce the notion of boundary objects in the management conflicts and negotiation practices around the Edwards Aquifer, the underground freshwater body in south-central Texas that provides water for San Antonio and nine counties. Furthermore, we explore a more specific area of water politics, namely, the negotiation of water conflicts for the health and well-being of the entire ecosystem. What is recommended is an integrative management in which the heterogeneous stakeholders come to cooperative decisions. We show how both economic and environmental concerns contribute to an overall sense of health. The health of the watershed is, in fact, a precondition for sustaining human health. Thus, this chapter itself could be seen as a boundary object between the first section of this book, with its focus on health and water, and the second section, which reverses the emphasis to water and health.